On 1 August 1945, the 501 PIR was moved to France while the rest of the division was based around Zell am See and Kaprun in the Austrian alps. The division was deactivated 30 November 1945.

The 101st was distinguished partly by its helmet decorations. The soldiers used card suits (diamonds, spades, hearts, and clubs) to indicate the regiment to which they belonged. The only exception being the 187th, who were added to the division later.

The 101st Airborne Division was reactivated as a training unit at Camp Breckinridge, Kentucky, in 1948 and again in 1950. It was reactivated again in 1954 at Fort Jackson, South Carolina, and in March 1956, the 101st was transferred, less personnel and equipment, to Fort Campbell, Kentucky, to be reorganized as a combat division. The 101st was reactivated as a "pentomic" division with five battle groups in place of its World War II structure that featured regiments and battalions. The reorganization was in place by late April 1957 and the division's battle groups were:

Other supporting units were also assigned.

The Little Rock Nine were a group of African-American students who were enrolled in Little Rock Central High School in September 1957, as a result of The U.S. Supreme Court's ruling in the historic Brown v. Board of Education case. Arkansas Governor Orval Faubus, in direct opposition to the Court's ruling, activated and deployed the Arkansas National Guard to support the segregationists on 4 September 1957. The sight of a line of soldiers blocking nine black students from attending high school immediately polarized the city.

As a result, elements of the division's 101st Airborne Battle Group, 327th Infantry (bearing the lineage of the old Company A, 327th Glider Infantry Regiment) were ordered to Little Rock by President Eisenhower to enforce the court injunction during the crisis. The division was deployed from September until Thanksgiving 1957, when Task Force 153rd Infantry, (federalized Arkansas National Guard) which had also been on duty at the school since 24 September, assumed responsibility. 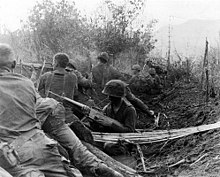 In the mid-1960s, the 1st Brigade and support troops were deployed to the Republic of Vietnam, followed by the rest of the division in late 1967. The 101st was deployed in the northern I Corps[disambiguation needed] region operating against the Vietnam People's Army (NVA) infiltration routes through Laos and the A Shau Valley for most of the war. In almost seven years of combat in Vietnam, elements of the 101st participated in 15 campaigns. Notable among these were the Battle of Hamburger Hill in 1969 and Firebase Ripcord in 1970.

On 12 March 1970, the 3rd Brigade of 101st began rebuilding abandoned Fire Support Base Ripcord which relied, as with most remote bases at the time, on a helicopter lifeline to get supplies in and the personnel out. The firebase was to be used for a planned offensive by the 101st to destroy NVA supply bases in the mountains overlooking the A Shau Valley. Located on the eastern edge of the valley, and taking place at the same time as the Cambodian Incursion, the operation was considered covert.

During the 23-day siege, 75 U.S. servicemen were killed in action, including 2nd Battalion, 506th Infantry commanding officer Colonel Andre Lucas, who was posthumously awarded the Medal of Honor, and 1st Lt. Bob Kalsu, the only American professional athlete to be killed during the war.[14] During the entire battle (including the siege), 250 members of the division were killed.

Fighting from four hilltops, surrounded, and outnumbered nearly ten to one, the division's forces inflicted heavy losses on eight enemy battalions before an aerial withdrawal was ordered on 23 July 1970 while under heavy mortar, anti-aircraft, and small arms fire, ending the siege. After the division withdrew from the firebase, USAF B-52 heavy bombers were sent in to carpet bomb the area.[15] NVA losses at Ripcord delayed the Easter Offensive by a full year.[16]

In 1971, elements of the division supported the ARVN Operation Lam Son 719, the invasion of southern Laos, but only aviation units actually entered Laos. In the seven years that all or part of the division served in Vietnam it suffered 4,011 Killed in Action and 18,259 Wounded in Action. Casualties for the 101st in Viet Nam were twice those suffered in World War II, and its total number of Killed in Action was the third highest of all U.S. Army ground units, behind the 1st Cavalry Division (5,464) and the 25th Infantry Division (4,561). Had the entire division arrived in 1965, as did the 1st Cavalry and 25th, its total casualties could have been even higher.

It has been said that most North Vietnamese had never seen a bald eagle, so they called the 101st soldiers "Chicken Men" or "Rooster Men." Viet Cong commanders were rumored to regularly include in their briefings that they were to avoid confrontation with the "Chicken Men" at all costs, as they were sure to lose. Supposedly this remained a source of fierce pride among veterans who served in Vietnam under the 101st.[17]

A member of the 101st Airborne Division, armed with an M60 machine gun, participates in a field exercise. M16A1 rifle in background with each soldier wearing an M1 Helmet

In 1968, the 101st took on the structure and equipment of an airmobile division. Following its return from Vietnam, the division was rebuilt with one brigade (3d) and supporting elements on jump status, using the assets of what had been the 173rd Airborne Brigade. The remaining two brigades and supporting units were organized as airmobile. With the exception of certain specialized units, such as the pathfinders and parachute riggers, in early 1974 the Army terminated jump status for the division. Concurrently the 101st introduced the Airmobile Badge (renamed later that year as the Air Assault Badge), the design of which was based on the Glider Badge of World War II. Initially the badge was only authorized for wear while assigned to the division, but in 1978 the Army authorized it for service-wide wear. Soldiers continued to wear the garrison cap with glider patch, bloused boots, and the cloth wing oval behind their wings, as had division paratroopers before them. A blue beret was authorized for the division in the early 1970s until revoked at the end of 1978.[18] The division also was authorized to wear a full color (white eagle) shoulder patch insignia instead[citation needed] of the subdued green eagle shoulder patch that was worn as a combat patch by soldiers who fought with the 101st in Vietnam[citation needed], a distinction shared with the 1st and 5th Infantry divisions.

Charles Bloodworth, a pathfinder officer in the 101st during the early 1970s, describes the transition of the post-war division to fully Air Assault and the adoption of the Air Assault Badge at this link.[19]

Tragedy struck the division on 12 December 1985. A civilian aircraft, Arrow Air Flight 1285, chartered to transport some of the division from peacekeeping duty with the Multinational Force and Observers on the Sinai Peninsula to Kentucky, crashed near Gander, Newfoundland. All eight air crew members and 248 US servicemen died, most were from the 3d Battalion, 502d Infantry. The crash was the worst in Canadian aviation history. President Ronald Reagan and his wife Nancy traveled to Fort Campbell to comfort grieving family members. On 8 March 1988, two U.S. Army helicopters collided in Fort Campbell, Kentucky, killing 17 servicemen.

Veterans Parades, 2014
by papajoad over a year ago

THE FIRST STARS AND STRIPES
by papajoad over a year ago

STAND DOWN ORDER
by papajoad over a year ago
More...